I’m not sure if I was thrilled or terrified, but the day arrived when I would scuba dive for the first time in a body of water that wasn’t a 12-foot-deep indoor pool.

The concept of diving sounds incredible, surrounded by deep, clear water and colorful fish. But when you think about being 60 feet under the surface with a small tank of air and a few hoses strapped to your back, it sounds more like pure madness. But I had already gone this far, and I wasn’t turning back.

Tarcila, our Airbnb housekeeper made us breakfast at 7:30 am so we would be ready for our driver from the dive shop to pick us up at 8. I left the researching of dive shops to my mom, and she booked with Karibik Diver – arguably the best decision we (a.k.a. she) made. The place is run by a German gentleman named Christian. While their rates were a bit more expensive than other shops we (a.k.a. she) checked prices for, they had a lot of positives going for them:

When we arrived at Karibik Drivers, one of the assistants pulled out wetsuits for us to try on until we found the correct size. They are meant to be skin tight so the water is trapped and warmed next to your body. A suit that is too loose will allow water to flow in and out and cool your body faster. My mom and I also rented fins, but brought our own snorkels and goggles from home. Every time we arrived at the shop, they had all of our correctly sized equipment laid out and ready to go.

Our dive group witnessed a lionfish swimming lazily past on my first dive, at a coral garden site called Montanita S.A.I. It took me a while to get the hang of getting out of the boat with my gear on. The dive master and his captain placed cylinders and BCDs (buoyancy control devices) behind divers on the bench, which you slip into and buckle up. After testing your regulator and double checking the air gauge, you slip goggles into place and hoist yourself onto the edge of the boat. With goggles secured in one hand and regulator in your mouth with the other, you flip backwards, cylinder first, off the side of the boat. This is a heavy and cumbersome process that became easier the more I did it. 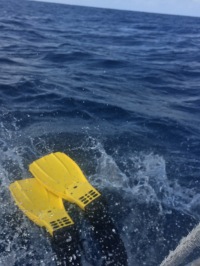 After a surface break on shore, we ventured to a site called the Pyramid, where we admired stingrays, a lobster, porcupine fish, and a great barracuda.

While my dive experience was amazing, I also learned a hard lesson about not taking motion sickness medication. I have a history of motion sickness, but still managed to forget my Dramamine back at the Airbnb. While I held it together for both boat rides, I was not comfortable, and experienced vertigo in the water. If you know you are prone to motion sickness, you will enjoy the beating sun, rolling waves and rocking of the boat much more with meds (just be sure to check with your doctor first).

On our way back to the Airbnb, I became acquainted with Karibik’s contracted driver, Luis. Initially, he spoke very little, until he learned I could speak Spanish. Over the course of the week, I learned about his interests, family, and details about where to go and how to get there on the island. At one point, Luis told me I was one of the only passengers who has ever made conversation to him. To me, it goes without saying that when you travel to a new place, an important element of learning the culture is speaking locals. Even if you don’t have the best handle on the native language, you have nothing to lose by trying, and most people respect and appreciate the effort. You can also get great recommendations on sites and restaurants to hit up!

As if diving wasn’t enough of an adventure, my mom decided we should try to take the public bus system for a tour around the island that evening. What better test of my Spanish than climbing aboard a bus bound to an unfamiliar location and figuring out what are (or are not) the safe places to get off?! Between our Airbnb hostess, a police officer, and a couple of ladies waiting at the bus stop, I received mixed advice on the hours the busses run and which one to take where.

So I’m obviously not on a bus here

Once we were already on the bus ­– a colorful little shuttle that whizzed down the streets, passing tourists on moto scooters – a fellow passenger who I asked for advice made it sound as though the bus would not take us back the other direction, and encouraged us to get off immediately (in a rather sketchy looking area) and catch a bus going the other way. After a few moments of panicked confusion, with my mom giving me English instructions in one ear, a curt and frownie-looking woman babbling Spanish in my other, and two kind young Colombian women standing in the bus aisle, assuring me we would find our way home safely, I opted to stay on the bus for a ride around the entire island. Thankfully, they do make one huge loop around. You’ll be on the bus for a darn long time, but consider it a cheap tour of the scenery.

The two young Colombians were incredibly friendly, highly entertaining, and meeting them was one of the highlights of my vacation. So, Johanna and Natalia, if you ever stumble across this blog, know that your kindness made an impression on someone.

We made it around the island and safely off the bus in around an hour and a half. Despite my initial fear of not knowing where we were going, the experience of figuring it out by myself (in Spanish), and watching the colorful buildings, swaying palm trees and lapping ocean waves fly past made it one of the coolest and least touristy experiences I had throughout our entire vacation.

When it was all said and done, the best advice I can offer my readers is that taking the bus is cheap, and busses DO go all the way around the island, on a primary road that parallels the ocean. Bus stops were easy to find, and usually just a walk down the street. The busses that drive from one end of San Andrés to the other are titled “San Luis,” which runs south, and “Central,” which returns to the north. They change the destination signs on the busses somewhere along the southern tip of the island.

I mean this literally and as a metaphor for life in general: don’t be afraid to jump on the bus ­– just make sure to bring your Dramamine.

One thought on “Motos and More: Travels to San Andrés Day 3”