At Thanksgiving, I always say my eyes are bigger than my stomach, because I usually dish up a plate of food larger than my head, eat half, and survive off the rest for the entire week that follows. The same goes for the number of books, magazines, adult coloring books and podcasts loaded into my backpack and on my phone for a single trip.

Expectation: I’m going to read and listen to smart things and be super intellectual! Reality: Sleeping and watching movies is cool too.

Our route took us from Fargo to Chicago, Chicago to Miami, Miami to Bogotá, Colombia, and finally to San Andrés. By the time the plane touched down on the very short San Andrés runway around 11:15 pm – to the cheers of passengers, exalting at not having crashed through the barbed wire-lined airport fence and sliding into the ocean ­– I had flipped through a few pages of a book I meant to finish last year, and listened to half of a 30-minute podcast. #productive

The entire walk down the steps to the tarmac and following a herd of Latin Americans through customs, I prayed that our luggage had made it onto each of the four planes, and would appear on the carousel. My mother all-too cheerfully declared that she thought it would be a miracle if it had.

We exchanged some money in the Bogotá airport, which gave us a better rate than San Andrés

Well, God must have taken pity on my under-preparation for the trip, because my two obnoxiously pink and purple poco-dotted suitcases came rolling by, followed by my mom’s simple black and blue ones. Yes, we way over packed.

When I previously mentioned following a herd of Latin Americans, I should explain that San Andrés does not seem to be a common vacation spot for folks from the U.S. Our fellow vacationers were primarily Colombians, with a mix of Brazilians, Chileans, Argentinians, and a small handful of Europeans. I met one other woman from the U.S., and several Germans at the scuba dive shop we patronized.

Excess of bags in tow, we followed an airport hallway down an escalator to the front, where we could hail a taxi. The hailing wasn’t difficult, considering they were lined up like cows at a feed trough, hungrily waiting for passengers to drive away with. No, the hard part was convincing one to take us where we needed to go, which wasn’t even far from the airport. Three actually turned us down with a finger shake and walking away without another word. What we figured out later was that they were either looking to drive somebody to the other side of the island to charge an arm and a leg, or drive those who were close so they could hurry back for another load. We were in the middle, and nobody seemed to understand exactly where our Airbnb was located. We eventually found a kind-looking, roly poly driver who loaded our bags, asked around, and googled the location until he understood where to drop us off. We pulled up to our gate right around 12:15 am, with the housekeeper, Tarcila, waiting to open it and welcome us into the residence. Day one – check.

Our “posada” (lodging) by day

I think my only regret from the trip (aside from not having dove more) was not taking a picture of our daily breakfast, provided by the Airbnb. 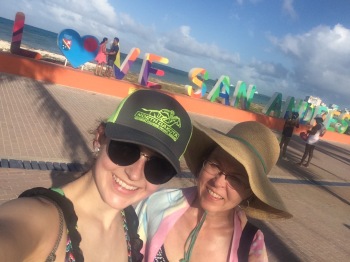 The primary language spoken is Spanish, but the hottest touristy photo op is in English…

After breakfast and meeting la dueña, Betty (owner) of the house, we ventured out to search for a supermarket, the beach, and maybe some bikes. We accomplished all of the above, and it apparently ran together very quickly, according to my travel journal:

Ate breakfast, then went and explored, went for a long walk along the beach, sat on a log, walked in water, haggled with bike rental, rode back to place for change of clothes and money, ran to grocery store, returned bikes, beach and sun bathing and swimming (bought sunglasses before this). Ate supper at Niko’s Seafood – food was good but not a lot of bang for your buck. Walked back along boardwalk. Went back to place, went to grocery store for apples and oranges.

Now if that wasn’t a piece of literary genius, I don’t know what is. Our Airbnb was along Sarie Bay on the West side of the island, about a 20-minute walk from the main beach on the North side. The boardwalk was beautiful, with swaying palm trees, white sand, local vendors, trendy shops, beachy people, and way too many thong swimsuits (I could have lived without seeing this part).

I mentioned bike rental. There are a few bike rental places near the beach, but they were few and far in between. We generally happened across them by chance while walking, and wondered why there weren’t more. I will explain our findings to this question in a later blog. The dude at the stand we located wanted to charge 10,000 Colombian Pesos for an hour, around $4 U.S. (very affordable, but 10,000 sounds like a big number when you’re still learning the exchange rate). Egged on by my mother, I haggled him down to $6,000, and they made for a nice ride back to our place and to the beach again.

Finding a supermercado, or grocery store, near our Airbnb was a lifesaver. We bought fruit every day as snacks, and found plenty of Colombian coffee to bring home as souvenirs. That being said, this is an island, so their grocery stores are not as well stocked as your local Walmart (which has yet to hit San Andrés island).

In order to keep costs down and avoid going out to eat all the time, we brought A TON of protein bars in our luggage, and were super glad we did. Restaurant prices are comparable to those you’ll find in the States, and there was so much seafood on the island that we tired of it quickly. In addition, when you’re on the go all day, it’s nice to have a quick fix to tide over your hunger. Any granola bars you find on the island will not compare to quality protein bars, so I highly recommend arriving prepared with snacks. Have I mentioned eating is one of my hobbies? So follow this advice and don’t go hungry.

The setting sun shined through the palm trees of the west shore, silhouetting them as we walked to and from the supermercado. Day 2 – check. Day 3 >>

One thought on “Motos and More: Travels to San Andrés Days 1 & 2”