Suits in the print of hundred dollar bills, plaid suits, patriotic suits. If I have one regret from Travers day, it’s that I didn’t take any photos of all the crazy men’s suits. Usually it’s the women who shine when it comes to fashion, but the men milling around Saratoga were absolutely killing it!

Despite the large quantities of people, the track didn’t feel overwhelmingly packed as I feared it would. It seemed much the same as the day of the Whitney Stakes, with the only difference being you needed a special pass to go anywhere. 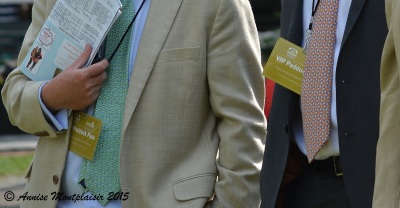 A black dot on your media badge to enter the press box, a special sticker for the paddock for the first five races and when the stakes races began, a special badge. So many rules put in place because of American Pharoah’s upcoming appearance.

The first few races were spent adjusting to the chaotic atmosphere and snapping a few winner’s circle selfies with The Special team. Of course we worked as well, but work never really felt like work at Saratoga.

One of my favorite trainers, Barclay Tagg – conditioner of 2003 Kentucky Derby winner Funny Cide – won the fourth race that day with a 2-year-old colt named Tale of S’avall, so I grabbed him for an interview.

After dividing up the stakes coverage duties amongst The Special team, it was decided that I would take the Grade 1 Ballerina, the seventh race on the Travers Day card. 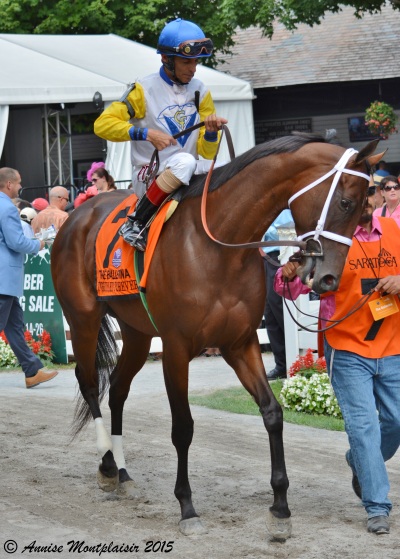 Unbridled Forever leaves the paddock for the Grade 1 Ballerina Stakes.

It still blows my mind a little bit to think that just two years ago I was working at the North Dakota Horse Park as the assistant to the director of media relations, interviewing horsemen for the very first time. Back then I got nervous about covering a $5,000 stakes race. Now I’m writing about $500,000 graded stakes!

For those of you who are unfamiliar with racing, a stakes race is one of the most prestigious types of races. Stakes races can be assigned a grade – 1, 2 or 3. A grade 1 is the highest level of prestige. To put it in perspective, the Triple Crown races are all grade 1.

Unbridled Forever’s win in the Ballerina was thrilling from all angles. It was her first graded stakes victory and she’s a homebred by Charles Fipke (meaning she’s bred and owned by the same person). I chatted with Unbridled Forever’s trainer Dallas Stewart, who also trained her dam (meaning her mother) Lemons Forever to a victory in the 2006 Kentucky Oaks.

Race after race zipped by, and a day that I would have loved to live out in slow motion trickled away until we reached the biggie – the long awaited, much anticipated Travers Stakes. 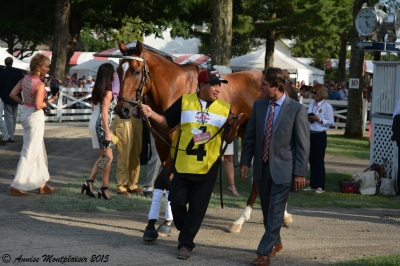 Trainer Keith Desormeaux walks beside Texas Red in the paddock before the Travers.

The scene in the paddock was unreal. People herded past the security guards like cattle, making their way into the enclosure where the 10-horse field would be saddled. As I walked inside, a wave of emotion came over me as I looked around and saw all the people gathered to celebrate the magnificent equine athletes that make the sport what it is.

When American Pharoah entered, people literally went nuts. Swarms of admirers crowded around him as he was saddled. It’s obvious that he’s no regular horse, but a hero that has entered the world of racing and rejuvenated the sport.

I have the utmost respect for American Pharoah and the impression he’s made on the industry, but while everyone was swarming the Triple Crown winner, I decided to take photos of some of the rest of the field, including Frosted and Texas Red, two of my other favorites. 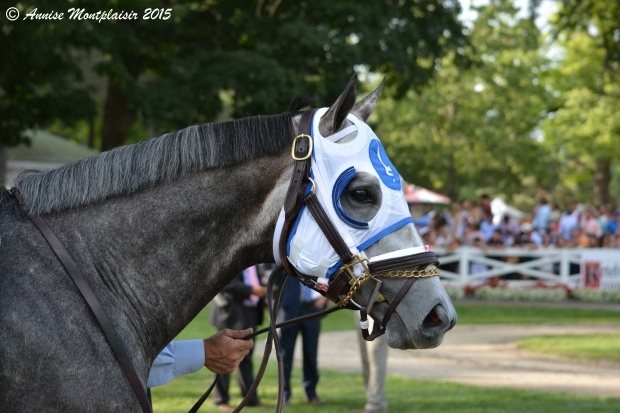 Frosted gazes at the throngs of people milling around the paddock.

I stopped taking photos when the paddock judge called for riders up and they paraded to the track. Anyone can take a photo, but I wanted to capture the experience in a video so I could watch it over and over again.

Fans prepare to capture the start of the Travers Stakes.

Reporters, journalists and photographers lined the railing of the roof, and I squeezed in between a couple familiar faces from the press box. The crowd below was massive, and the congregation swallowed up any familiar faces to form a giant, colorful ocean of horse racing fans. The horses warmed up and headed to the post.

One by one, they assumed their positions in the starting gates. Once in line there was a dramatic pause before the doors flew open in one swift movement, releasing the fleet of Thoroughbred colts.

If there’s one talent I wish I possessed – and I suppose this will come with time and practice – it would be to slow races down in my head and critically analyze each horse’s position and movement. Races go by so quickly that it’s hard to comprehend much more than a blur of colors and associate them with the bombardment of jabber from the announcer. There are finite details that an untrained eye misses during a race, such as the slight movement of a jockey as he moves his horse off the rail to the outside between horses and the difference that made in the outcome. 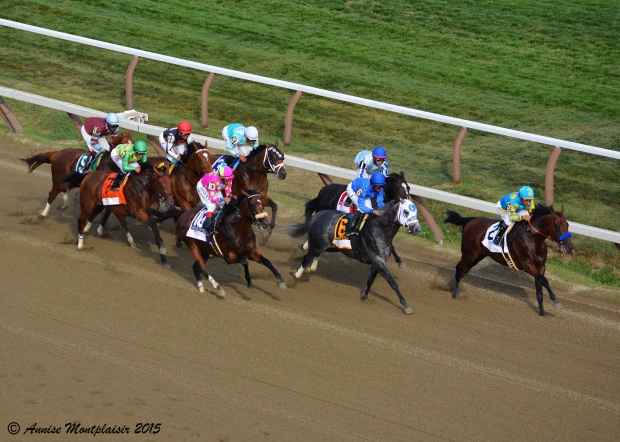 The field of the Travers passes in front of the grandstands for the first time.

When they turned for the stretch, it was hard to not get shivers down your spine. American Pharoah battled gamely with Frosted, but he just didn’t have the same dominating kick that he had when he won the Haskell. Within the final few strides, American Pharoah shook off Frosted, but Keen Ice bounded ahead to claim the Travers.

A wave of disbelief seemed to wash over the crowd. There was no booing that I heard, but almost a trance-like surprise. The Saratoga “Graveyard of Champions” lore, known as so for the great horses that have lost there, remained intact. 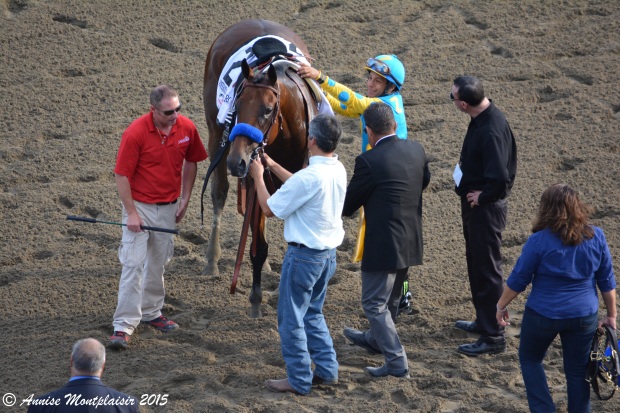 American Pharoah gets unsaddled after the Travers.

The reporter standing next to me was also in awe, and all we could do was look at one another, shake our heads and say ‘wow.’ The loss did nothing to tarnish American Pharoah’s status as a legend in racing, but it will no doubt go down in history. Someday I will sit down and tell my grandchildren about the time I saw American Pharoah run his race and continue fighting, even when he was out of gas and running only on heart. 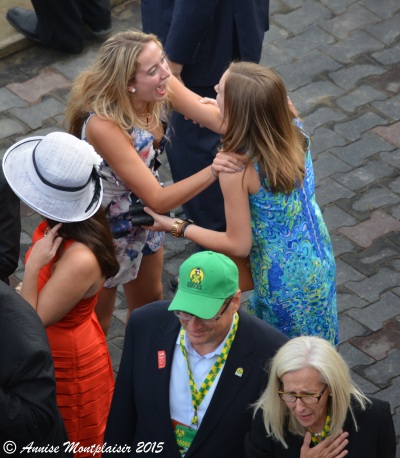 I remained on the roof while the Donegal Racing team swarmed the winner’s circle to greet the victorious Keen Ice. Their exuberance could be felt from where I stood, and I watched as his connections embraced one another.

The excitement stayed with me in the form of a headache for the remainder of the races and back in the office where I stared blankly at my computer screen. How do you channel those moments? How can you make people feel the passion of watching a horse cross a finish line first, etching their way into history books and memories?

As a budding journalist, I’m still learning how to do that. But one of the many wonderful things about being a part of The Saratoga Special team this summer was that I worked under masters of the pen – seasoned writers who craft their pieces in an artful and realistic way that puts people right there in the stands when they read. 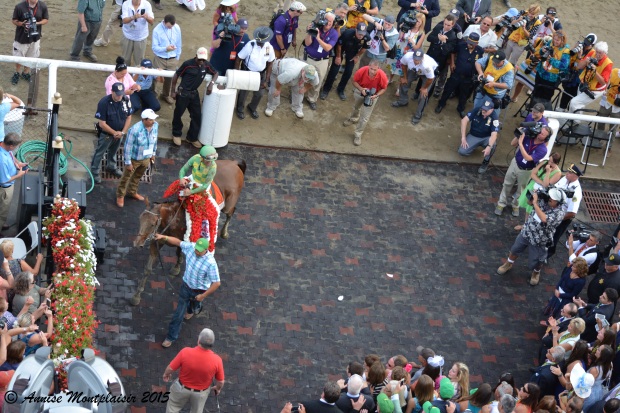 I left the office at 1:20 a.m., satisfied with the works I had created and still reveling in the day that had passed, optimistic about the new day to come. 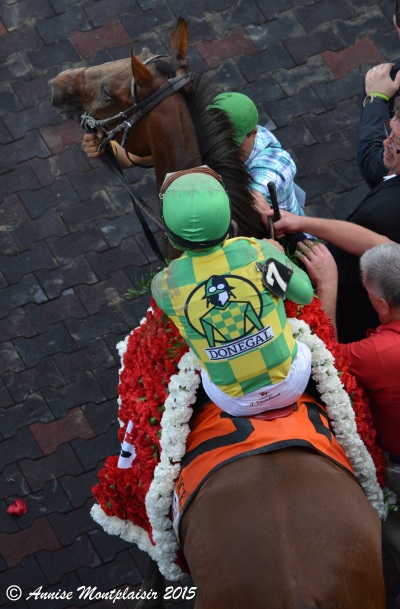 To check out my videos of the paddock before the Travers and the Travers stretch run, follow these links! >>