Now that I’ve had a few days to recuperate after jet-setting across the country for a final weekend of racing at Saratoga Racecourse, it’s time to get back to blogging. My productivity level took a nose dive when it came to doing anything school related today, and this seemed like a far better option than reading an organizational communication textbook. Plus, I’ve been itching to dig through my photos from Travers weekend!

Last Friday morning (the 28th) I was in definite danger of going slightly crazy. My bags were packed and ready to go, my flight itinerary was memorized and I had texted my Saratoga friends about a million times reminding them of how excited I was to return. After surviving nearly the entire first week back to school, only one class stood between me and my flight returning to the place I’ve now deemed my second home.

My parents were probably as anxious for me to leave as I was, as they had to endure an entire week of my crazy ups and downs. For those of you who’ve seen the Disney movie “Inside Out,” I pretty much bounced back and forth between resembling the characters ‘Sadness’ and ‘Joy.’ One moment I was moping around the house, complaining about how down in the dumps I was to be back and what a grind school is, and the next I was bouncing off walls, wildly singing and dancing, reveling in the fact that I was returning for the Travers Stakes.

As you probably gathered from my last blog written on Friday, I was pretty excited.

Despite the amount of traveling and the number of plane rides I’ve taken over the years, I’m still not a fan of planes. Airports yes. Planes no. Airports are equipped with the best people watching you could possibly find. Airplanes are stuffy and confining, cold, dirty and not to mention a gazillion feet up in the air. Unless I’m mounted on a horse, I like my feet to be firmly planted on the ground, thank you very much.

I flew into the Albany airport around 10:20 p.m. that night and got to bed at some point after midnight. When my alarm went off at 4:30 Saturday morning I might have questioned my own sanity, but only momentarily. By the time I arrived at the track at 5:30 my worries galloped away with each passing Thoroughbred. It was almost as though I had turned back the clock and the week spent in school never even happened. I watched the sun rise over the track, illuminating the steam that blew in puffs from the horse’s nostrils into the crisply chilling late summer air as they galloped along. 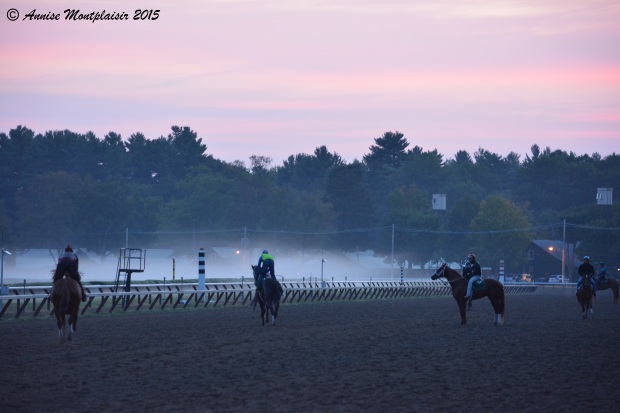 Despite the comforting familiarity, the track also emitted a different vibe. Horses and riders bustled back and forth from their barns to the track, cramming in their training sessions during the abbreviated training hours. The consistent hum of conversation evolved around the Travers Stakes and the presence of American Pharoah, who was comfortably tucked into barn 25 as he awaited yet another date with destiny.

The morning passed quickly as I bounced from the rail to the track kitchen to greet the guys I worked with, then to American Pharoah’s barn to snap countless photos of him walking around the shedrow and having the poultice washed off his legs. When he heard the cameras clicking, he pause dramatically and turned his head slightly, posing for the slew of photographers. What a ham!

My goodness it felt good to be back! After a solid morning of cruising around and accomplishing very little other than absorbing the electric atmosphere and savoring the dirt and horse smell that accompanies the racetrack, I returned to my Saratoga home to prepare for the Travers.

Breakfast eaten, hair done and new dress looking fab (what better excuse to get a new dress than for the Travers Stakes?!), I did one final equipment rundown before embarking on part two of Travers Day.

I’m locked and loaded and ready for the races!

Be sure to check back for Travers Day Part 2!