According to the International Federation of Horse Racing Authorities Facts and Figures, during the 2015 horse racing season, Chile distributed the equivalent of $27,519,145 US in prize money for Thoroughbred flat racing. Argentina distributed $52,690,252. Brazil’s numbers are considerably lower, at $12,851,015.[1]

The same year, the United States distributed approximately $901,641,183 in prize money for flat racing alone – not including steeplechase competitions. These statistics alone provide a clear reason for why the U.S. is seeing considerably more Latin American involvement. Not only are there more racing opportunities at tracks across the nation, but there is more prize money. To provide an example, the Gran Premio Club Hípico de Santiago-Falabella is a Group 1[2] race in Chile that serves as the Breeders’ Cup Challenge Race of Chile (meaning the winning horse has an automatic berth into a Breeder’s Cup race in the U.S.). The 2000-meter race (the equivalent to 1 ¼ mile) on the turf, is open to horses 3 years of age and older. At the 2016 running, $35,000,000 Chilean Pesos were awarded to the winner, Kitcat. This amounts to about $53,969 U.S. dollars. To compare, we can look at the Grade 1 Arlington Million, also a Breeder’s Cup Challenge race, run in the U.S. with the exact same conditions (1 ¼ miles run on the turf, open to 3-year-olds and older). With a total purse of $1 million, the 2016 winner, Mondialiste, took home $570,000 for his connections. 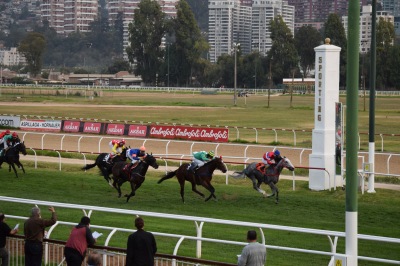 Prominent horse racing journalist and a 2016 recipient of an Eclipse Award of Merit, Andrew Beyer provided commentary in a 2011 column for the Washington Post about his personal experiences visiting Hipódromo Chile, a racetrack in Santiago. Beyer makes observations about the frequency that Chilean Thoroughbreds race, sometimes upwards of 100 times. This is extremely uncommon in the United States, where most racehorses run once or twice a month maximum over a relatively short career. One Thoroughbred Beyer mentioned is 10-year-old (old for a racehorse) Paganini, who had run 247 times and amassed around $54,000 – a pittance by U.S. racing standards. Beyer quoted one trainer who said the key to racehorse longevity is to be gentle in training, never work them against the clock, and start young to begin strengthening their bones. The trainer believed longevity is in their genes. Cougar II, one of Chile’s all-time great horses, is a model for racehorse durability, having raced 50 times. He came to the U.S. from his birth country, and in 1972 became a U.S. champion at the age of 6 (Beyer, 2011).

Beyer proceeds to highlight the economic weakness of Chile’s Thoroughbred racing industry. Horses there must race often to make money. As opposed to prestigious races in the U.S., where purses are anywhere from $200,000 to $1 million, the purse for the same quality of race could be $15,000 in Chile. In a lower level race, purses are around $4,000, with the winner receiving less than $1,500 (Beyer, 2011). Although training costs are lower than the U.S., estimated at $500 per month, there is little room for profit.

Leaving the paddock for a race at Valparaiso Sporting in Chile

Latin Americans are not only coming to the U.S. to experience North America’s version of the industry. Several companies in the United States are beginning to search within South America for prospective talent that could be competitive in the U.S., and to give Latin Americans an encouraging push toward the U.S.’s market. In 2016, Marshall Taylor of Taylor Made Farm and Sales in Kentucky, and Sebastian Angelillo, a native of Uruguay who has worked for Taylor Made and whose family owns Haras Sureno, documented their travels around South America through blogs in the Thoroughbred Daily News trade publication. Visiting farms and racetracks, their goal was “to increase awareness of the quality of South American Thoroughbreds in North America and help bring talented runners from South America to the United States” (Taylor & Angelillo, 2016).

Their first blog entry about Chile estimates that the country’s Thoroughbred foal crop is about 1,700 each year. Foaling practices are similar to those in the U.S., with the greatest exception being that they are on a Southern Hemisphere foaling schedule. In the United States, the recognized birthday of all Thoroughbred racehorses is January 1, regardless of the day they were foaled during a particular year. In South America, which is on the southern hemisphere, the universal birthday is July 1[3]. In recent years, Chile has been the most active when it comes to shuttling North American stallions to breed in the southern hemisphere. Scat Daddy, a stallion who passed away in 2015, fueled this interest, becoming one of Chile’s most prolific and successful stallions.

A note to add, as observed throughout my personal experiences at racetracks in Chile and reflected in Taylor and Angelillo’s blogs, is that Chilean racing can be compared and contrasted to the U.S. on many different levels. While they race on both dirt and turf, two of Chile’s three primary tracks, Hipódromo Chile and Valparaíso Sporting, run counter-clockwise, similar to the U.S., while the third, Club Hípico, runs clockwise. Morning training begins later than in the U.S., where tracks open as early as 5:30 am. In Chile, many horses will not set foot on the track until 8 a.m. or later. Most often, unless they are performing an official timed workout, racehorses are exercised without a saddle, which is similar in Argentina.

Returning to Taylor and Angelillo, the pair moved on to Argentina after Chile, where approximately 8,000 foals are born each year. They published their findings in their blog:

“We conducted a study of all the 106 horses that were shipped from Chile, Argentina, Uruguay, and Brazil to the United States in the past two years, 12 (11.3%) of whom had already won at group level in the home countries. There were 3 Grade 1 winners, each was Argentine-bred. Of the 106 horses, 40 of the horses that shipped to the United States from South America were not group horses in South America. Eleven of the 12 group stakes winners were given at least four months off before breezing. It also looked as if our warmer climate gave most of these horses a better place to adapt. South American mares have also been getting the job done in the States. Grade 1 winner Salutos Amigos, Grade 1 winner and Derby contender Creator, and Grade 2 winning filly Carina Mia are all out of South American-bred mares.” (Taylor & Angelillo, 2016)

Angelillo and Taylor’s study provides evidence for how competitive South American racehorses have the ability to be in the United States.

In the following installment, we will transition to looking at Latin American interest in the U.S. horse racing industry.

[1] These numbers have been converted from Euros to dollars

[3] The recognized Thoroughbred birthday in the southern hemisphere can change depending on the country. For example, in Australia and New Zealand, it is August 1 (Fedorka, 2017).

All photos © Annise Montplaisir and http://www.annisesanecdotes.com

Just a beautiful spring day 🌸
Last year’s #KentuckyDerby was one of the best days ever with all the best people. Missing you all, and hoping you enjoy an amazing #KYDerbyatHome! #Amplifyhorseracing
Bike rides, sunsets, and good dogs ❤️ I might be completing the rest of Godolphin Flying Start remotely due to corona virus, but that doesn’t mean us trainees aren’t still busy! Tune into the @godolphinflyingstart story tomorrow for news from the USA 2nd year trainees! 🇺🇸
I had an amazing morning at Meydan, and I’m very thankful to be learning and experiencing this unique and fascinating country. Tomorrow marks the beginning of Lent with Ash Wednesday. I will be “fasting” from Instagram. Social media has become so ingrained in our lives that we don’t even think about spending minutes and hours of our precious time scrolling, looking at the lives of others, the places we want to visit and the food we want to eat. So I’m going to take a break from Instagram for a while, stop killing time and instead spend it living! Please do not try to reach me on Instagram. Facebook messenger or WhatsApp are the way to go! Thank you and God bless! ❤️Annise
Pictures from a wonderful and humbling week in Dubai! 🇦🇪 From a parking ticket and hair cut gone awry (not pictured 💁🏻‍♀️), to motion sickness while off-roading in the desert, a 2-minute camel ride in the dark, the strangest garden I have ever seen, and enjoying co-working spaces. #Dubai #Desert #camel
Shadowy horses and a 🦅👁view. #Meydan
%d bloggers like this: