I met my first love when I was 8 years old. Young, huh?

We were introduced with a note. It was wrapped in a small box and handed to me by my mother on Christmas Day of 2003. Undoubtedly the best day of my life – not only for what happened that day, but for the series of life events it triggered, like the first domino in an intricate pattern, each one clinking and falling against the next, forming loops and circles and long lines.

I unwrapped the box, I think it had once held paperclips, and pulled out a note scrawled in my mom’s neat and elegant handwriting: “Go to the window and you will see, a friend to hug and love with glee.”

The best day of many people’s lives is when they look down the aisle of a church and take the first steps toward the one they will spend the rest of their life with. And maybe someday that will be one of the best days of my life as well. But on that Christmas Day, I pushed my chair away from our dining room table and a plate with a half-eaten caramel roll, and took my first steps toward the kitchen window, hardly daring to hope for what, or who would be waiting for me when I looked outside.

I’ve always wondered, out of all the little girls who ask for a pony for Christmas, how many are actually granted their wish. I was one of the lucky ones.

I stood on my tip-toes and leaned over the kitchen sink to peer out the window. Tied to our front deck was the most beautiful creature I had ever seen: a pony with a thick, red roan-colored winter coat and a big, red bow hanging around her neck.

Her name was Ginger.

Just three days short of 13 years later, we bid our pony farewell and sent her to Heaven.

But life can be cruel, so that didn’t pan out.

Ginger wasn’t perfect. She had a habit of biting that she kept up right to the end, and bucked me off more than once. But she was still my Black Stallion, the Pie and Misty of Chincoteague, all wrapped up in one little red package.

I wasn’t perfect. My mom and I often joke that Ginger was our guinea pig, the one who endured our rookie first-time horse owner mistakes. There were times when I lost my temper and my hands were too rough. I wasn’t always patient. I didn’t always realize that Ginger’s mistakes were often caused by my own ignorance, bad riding or poor handling. But I learned.

Gosh, there are so many precious memories.

Once, I left the gate chain unlatched, loosely hanging over the fence. My mom came out the next morning to find neither Ginger nor Cielo, a gelding we once owned, waiting for their feed. They took a good, 6-mile adventure around the countryside before we found them a half-mile from our house. Ginger even climbed up on one neighbor’s deck, as we could tell from her hoof prints in the snow. I taught her that trick, encouraging her to stand with her front legs propped on our back deck like a circus pony.

Ginger lived alone at our place for a year and a half before we bought Cielo, my mom’s first horse. One day I climbed out of our car with a big toy pony I had brought home from a friend’s house. It stood a foot tall to the top of its back, a foot and a half to the head. Ginger caught a glimpse of it and let out a screaming whinny. I carried it to the paddock and let her sniff its nose. She was so lonesome, she thought the toy pony was real and ran around the paddock for an hour calling out for its return. That memory hurts, as it was such a sad sight. But we put a rush order on buying her a companion.

A year or so down the road in the midst of another winter, I decided to teach Ginger how to pull a sled. I dug varying lengths of rope out of our garage and fastened them from her western saddle we bought off eBay to a giant, bright orange 6-foot sled. If this story seems like it’s going down a bad path, you’re right. Ginger patiently tolerated my request to sit in the sled as my mom led her through the snow.

And then I decided I needed to steer myself.

I ground tied Ginger outside the garage as I dug for more rope, fashioning long reins out of a lunge line. My brother, probably around 16 at the time, walked up, plopped down in the sled and said “Giddy up Ginger!”

Ginger gladly obliged, but I hadn’t yet attached the makeshift reins – so at this point there was nothing connecting the sled’s passenger to Ginger’s head. I remember feeling like my stomach was going to jump out my mouth as I watched Ginger pick up momentum, going from a walk to a trot then gallop as she blazed through the yard. Somewhere in between, Aaron rolled out into the snow and Ginger galloped into the darkness, giant orange sled flailing wildly behind. Where would we even begin to look for her? We didn’t have to go far. Ten minutes later Ginger came trotting back into the yard, sled in tow. 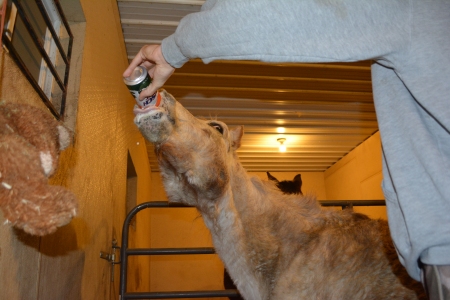 She loved drinking from coffee mugs and aluminum cans. Apple juice, beer, lemonade, it didn’t really matter, long as it had a decent flavor and you didn’t try to water it down too much. She wrapped her lips around the rim and stuck out her tongue, making slurpy noises and not allowing a drop to hit the ground.

Horse camp, 4-H horse shows, long gallops down a grassy field road between soy bean and wheat fields, standing on her back for photos and jumping hay bales. There are so many memories.

There’s no easy way of saying goodbye to your first love – although it’s not actually goodbye, only see you later. Because I’ll see you on the other side, my friend.

And thank you. Thank you for everything, Ginger. 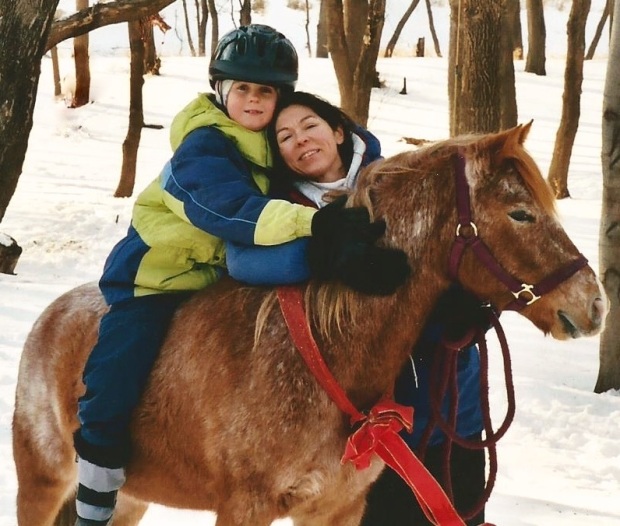 You can read more about that Christmas Day in this blog post I wrote while interning with the American Quarter Horse Association.

2 thoughts on “Thank you Ginger”