On a Tuesday afternoon in Saratoga Springs,  I learned how to ride side saddle

Today’s one of those days when my heart aches for New York a little more than usual. A photographer I met while working at Saratoga Race Course tweeted a picture of the Whitney Viewing Stand – a viewing area where you can watch racehorses train on Saratoga’s Oklahoma Training Track — covered in a blanket of snow that had fallen over the last couple of days and looking sadly forlorn. Gilded and rust colored leaves clung to the spindly branches of trees in the background, a last-ditch showcase by fall before winter takes over.

Even on an occasional day off, I enjoyed driving to the track and watching the Thoroughbreds, many of which were steeplechase horses, walk onto the infield of the Oklahoma during the late morning for grass gallops. The athleticism and beauty of a racehorse in motion should be savored with the eyes whenever you have the opportunity, and sometimes it was nice to stop and watch without the niggling feeling that I should be chasing someone down for an interview.

Big pokes his head out of the indoor arena to check out Java and I. Photos by Donna Vild

With the early rise and late descent of the summer sun, it was easy to seize my days off to their entirety and fill them to the brim with whatever I pleased. After a morning at the track and a walk down Broadway of downtown Saratoga Springs (which is amazing if you ever have the opportunity to visit) I returned to the place I lived and hopped in the car with my “Saratoga Mom” Donna Vild, just as sprinkles began to fall from the progressively greying sky.

I interrupt this thought to suggest that if you haven’t read Riding Side Saddle, Part 1: Learning the Sport, I highly recommend you take a look back, as it tells you a bit more about Donna, her horses and her history with riding side saddle.

By the time we made it to the barn it was pouring, but no need to worry because there was an indoor arena. And aside from that, there’s something relaxing about being in a barn with warm, smelly horses and rain tapping on the roof on a mid-summer afternoon.

Donna and I tacked up Big and Java, her two off-track-Thoroughbreds and led them to the indoor. Java, my equine instructor for the day, and I started off in a regular saddle so I could get a feel for his personality and way of going. Then Donna tacked him in a side saddle and instructed me in organizing my body position to fit correctly into the saddle. 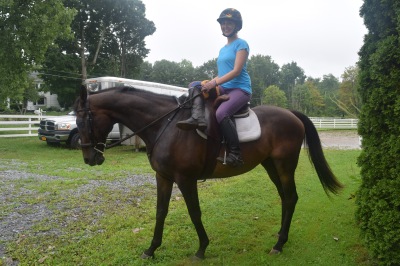 Java and I strike a pose

When you see elegant woman riding side saddle in movies about times long past, it usually looks as though they’re sitting uncomfortably tilted to one side of the saddle. Donna explained that your hips should actually be square and facing forward, almost as though you’re riding astride. You just happen to have both legs on the left side of the horse.

Almost counterintuitive to what you might expect, if you feel yourself losing your balance while riding side saddle, it’s important to pull your right shoulder back. This pulls your weight up and into the leg rest and padding that secures your right leg.

My impression from riding in a side saddle is that when seated correctly, it would actually be quite difficult to fall off because your legs and seat are cushioned into the saddle so tightly. It’s when you allow your weight to drift to the left that causes your body to loosen up and become unbalanced.

Despite how secure I was in the side saddle, I also felt as though a week or two of yoga practice would have been beneficial before hopping on. It would certainly help to loosen up my extremely un-flexible body so the contortion of my knees and hips wasn’t so severe and the entire experience not so physically taxing. Not going to lie, my right knee hurt like the dickens by the time we finished my lesson, and I was physically exhausted! It probably didn’t help that I hadn’t ridden a horse since leaving for New York.

A look at the off side of the side saddle

As Java moved underneath me, especially at the trot, I had to actively think about allowing my hips to follow his joggling diagonal motion rather than bouncing up and down like a crazy woman – which I’m sure is how I looked like for at least the first few turns of the arena! I had to keep reminding myself to pull my shoulders back and my navel in so my torso didn’t get way ahead of my hips.

While I never resembled anything close to graceful, I did feel like I caught on fairly quickly. I didn’t fall off, so that’s a good sign. As I trotted Java around the arena, in circles and over a ground pole, Donna beamed and called out encouraging words. Pretty sure the giant goofy smile – a hybrid between pure joy and extraordinary concentration – never left my face. At one point Donna said something about me looking like an elegant lady, which was sure a nice compliment, although I have a ways to go before I can star in an episode of Downton Abbey!

A fun fact is that there are generally two dee rings on the off side of a side saddle to attach a sandwich case. When showing side saddle, the sandwich case must hold a wrapped sandwich and a flask with sherry or tea. And judges will actually check these!

Of course Donna and I couldn’t leave the barn before taking plenty of photos and video. As we walked Java out of the indoor arena, the clouds began to clear and the rain went away, leaving a greyish afternoon thick with sticky humidity, but good lighting for photos.

While I have pictures with Donna’s horses, I somehow managed to spend two summers with her family and never take a single one with Donna or the rest of the bunch, which is too bad. But as Donna put it, “if I remember correctly, your half of the photo would be a blur!! You were never in one place for long!!”

True, so very true. But I’m incredibly grateful for the afternoon I spent learning how to ride side saddle and experiencing a small part of east coast horse culture.