After a nightmarish battle with my 6-year-old laptop, who decided to make me age a few years in a matter of days, today marks the end of my two-week blogging hiatus. Said hiatus can only be partially blamed on the absence of my laptop. In all honesty, I needed a bit of a break.

The week after the Clásico Club Hípico de Santiago was spent typing approximately 11,300 words. After transcribing interview notes, writing an article for thisishorseracing.com, finishing a lengthy blog, and then hammering through a 5-page (single spaced) paper for a class that makes watching paint dry sound fun, I was plumb tuckered out.

By Saturday, May 28th, I had almost everything finished aside from the school paper, the very last item on my list of writing subjects (the racing articles were obvious priorities). My computer had auto-updated to Windows 10 two days prior with little problem. I continued working on my laptop all day Friday, powering down in the evening to head out with friends. 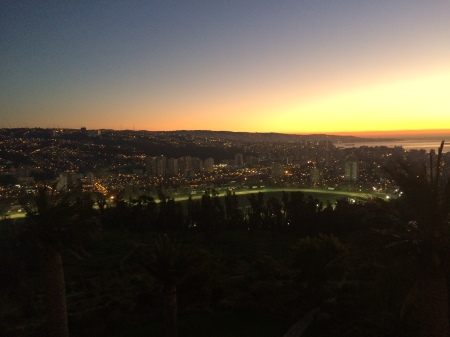 View of the Valparaíso Sporting racetrack at dusk from my university.

Saturday morning, I woke up early and fired up the old Toshiba, expecting to show that paper who’s boss. I was greeted by a nice black screen. ‘Hmm, not gonna play nice today, are we now?’ I thought as I turned it off again and took the battery out. I tried a second time. Black screen. I consulted youtube on my phone for every possible solution, none of which I was capable of performing worked.

Sad to say, but my laptop is an enormous part of my life, and I don’t think we truly realize how much our technology dictates our time until we no longer have access. That, and I didn’t have all my files backed up. Dumb, I know.

I started tearing up as I shoved the laptop in my backpack and set off to find a technology store. What would happen if I lost everything?

I left it at the first place I found, not knowing what to look for in a good computer place or knowing what prices are reasonable for computer repairs. I would end up paying for this decision – in both time and money. Maybe the fact that one of the computer techs took a keen interest in my gringa-ness, asking where I’m from and why I’m living in Viña, should have been a sign.

This sign from a bank in town makes my heart melt. It says “We can all have a house.”

I walked home, backpack much lighter (my desktop-sized laptop is a real beast to carry). I’d like to say I didn’t cry. I mean, it’s a laptop for Pete’s sake. As my brother always says, you shouldn’t love things that can’t love you back. But let’s be real here, I called up dad, hoping for a bit of consolation, and ugly-cried as I walked home.

What now? Thankfully, my host mom has an old desktop that runs like molasses in December. But the old girl served her purpose as I cranked out my paper. Sign number two that the computer place was a bad deal: They never called me as they said they would when they discovered the problem. I had to return to the store and ask.

A bad hard drive, is what they told me the problem was in Spanish. But they could probably save my files. They asked if I wanted them to replace it. Seeing no other options, and lacking the knowledge to replace a hard drive myself, I quickly agreed.

After going in twice more to check on the laptop’s progress, they finally called several days later to say it was ready. I paid a hefty chunk of change for the new hard drive, plus an external hard drive to back up my files.  They didn’t offer me back my old one. That, and the rudeness of the woman working behind the counter were signs number three and four.

These folks doing yoga on the beach were accompanied by a few stray dogs.

I settled down at the dining room table that night to organize my files, which had all been stashed in a single folder on my desktop. My first realization was that my computer was entirely in Spanish. Okay, not a problem… until I realized that the version of Windows 7 they had installed on the hard drive didn’t support the language change to English without being upgraded… weird. Even more concerning, though, was that my Microsoft Office, which had previously been 2013, had been downgraded to 2007.

I spent hour’s youtubing and googling how to change the language settings. I messaged friends. I googled some more. When I finally realized I would have to update Windows to change the language, it was late and I was tired and frustrated. I decided to update to Windows 10 again, since it was free. I started the update and went to bed.

I awoke the next morning to another black screen. NO. NO. NO.

After a few moments of feeling complete and utter despair and frustration, I pulled myself together. I would not ugly cry over a stupid laptop – nope, not this strong, independent, self-sufficient woman. I started googling from my phone again, and this time had an epiphany. I learned that it’s not uncommon to have black screen problems after updating to Windows 10, because sometimes your computer thinks it needs to display the screen onto a different monitor. 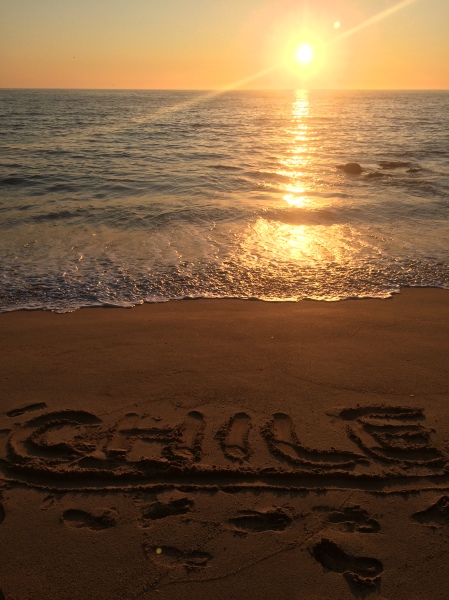 My artwork in the sand

I realized then that I had probably been scammed by the computer place. If the hard drive was truly the problem, it made no sense that I was having the same issues with a new drive. I would have no option but to go back to the computer place and have them fix it right, and maybe recoup some of my cash. But this time I couldn’t go alone. They had taken advantage of me before because I’m a foreigner, so I would need backup.

So my host mom called in the big guns. “Aldito,” as he’s called, is a family friend of hers and a computer tech student. He goes to school six days out of the week and has a crazy schedule. But bless his heart, he and his incredibly intelligent and beautiful girlfriend Carolina came to my rescue at our apartment. Within 10 minutes, Aldito had the display fixed on my screen.

They walked me to the computer shop, where Carolina explained the problem to the sketchy looking shop manager, acting as my cousin. At first he acted defensive, and then played stupid. We requested that I get my old hard drive back, but sketchy manager said he didn’t know which one was mine and we would have to come back another day when one of his other techs was in (it was in a pile with others). Bad sign number gazillion, I think you get the point.

Long story short, I did get it back and Aldito was able to take a look at it and determine that the hard drive was by no means bad, although it did have a couple slight glitches. He helped me re-upgrade all my programs and restore everything to the way it was before on the new hard drive.

I didn’t get any money back, but I learned several “valuable” – haha, get it? – lessons from the experience. I’m good at learning those valuable lessons, if you hadn’t already figured that out from my taxi story.

So a few hundred dollars and several weeks later, I can breathe a sigh of relief as I type away at this blog, files backed up and ancient Toshiba good as new. Thank you God , thank you Aldito, and thank you readers for your patience during my break from blogging. 🙂