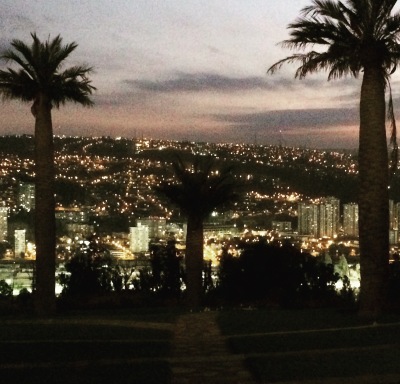 The view from my Chilean university at dusk

School has always been important to me, and the start of each new semester generally means clutching to my schedule with a white-knuckled death grip. Homework and grades always come before going out and having fun. I can’t help it, it’s just the way I am.

Many of my friends and family members told me how brave I was to leave home and study in another country. But I don’t think it has anything to do with bravery. The true challenge is being adaptable.

Before I left for Chile, all I could imagine was traversing the globe with friends, eating exotic foods and dancing the night away at raucous clubs.

Most people who’ve ever read my blogs or know me personally realize that I like plans. Life feels easier when it’s organized – compartmentalized neatly into a schedule. The hardest thing for me since arriving here in Chile is letting go of all that. Because even though grades are more important than clubbing, seeing the world will give you far more of an education than anything you learn in the confines of a classroom. 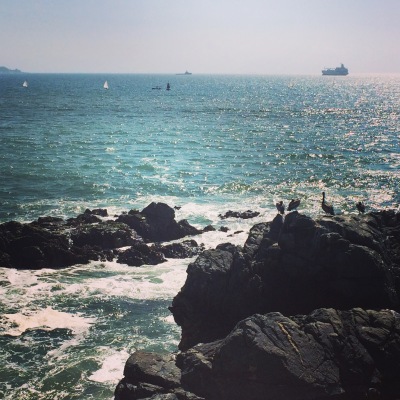 My view as I jogged along the beach

Yesterday, unable to concentrate on homework and overwhelmed with things that shouldn’t require worrying, I went for a run. I do my best thinking when my feet are moving and my lungs are breathing fresh air. As I jogged along the Pacific Ocean, I passed bustling people, meandering stray dogs, squawking seagulls and honking busses.

I ended up on the beach, where I plopped down to rest. With my transparently white legs stretched out, I must have looked like a toddler as I sat and played in the sand. I buried my hands in it, created small dunes and let it dust my knees as it slipped from my palms.

Thoughts and time slipped away. The waves created an ambient background, drowning out the craziness of life.

I didn’t check my phone for the time. I didn’t worry about getting home to do school work. I didn’t really think about anything. The only sensation I felt was the sand in my hands, the sun on my back and ocean spray on my face. 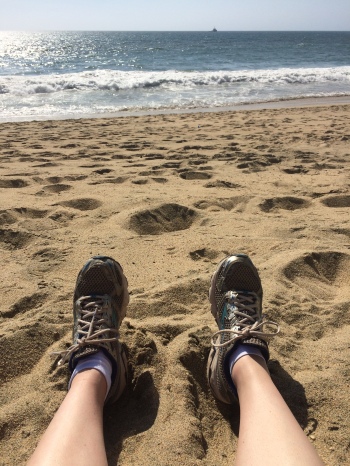 When you strip away thoughts and worries, you leave room for absorbing the rawness of life; tiny moments that would usually go unnoticed.

A lifeguard walked down the beach, loyally pursued by a dark colored stray dog with long matted fur – one of the numerous strays who occupy the streets of Viña del Mar. You could tell they knew each other well. Every time the lifeguard paused, so did the dog. Then with the nod of his head or subtle hand gesture, the two continued along the shore.

At one point the lifeguard stopped and bent over to pick up a palm-sized rock. The dog wagged its tail and crouched down low, waiting for him to throw it. The lifeguard stood patiently, scanning the horizon and ignoring his canine friend. The dog crept closer and closer, never taking its eyes off the lifeguard’s hand. After several minutes, the lifeguard chucked the rock towards to water, where it plopped into the wet sand. The dog bounded towards the spot and began digging fiercely, sending sand flying in every direction until he had found the rock. He picked it up in his mouth and laid down, eyeing the lifeguard who had also taken a seat.

I looked around, wondering if anyone else had noticed this exchange between man and dog.

Life isn’t a checklist. It’s far more like watching a movie with subtitles – if you look away from the screen, you’ll miss something. 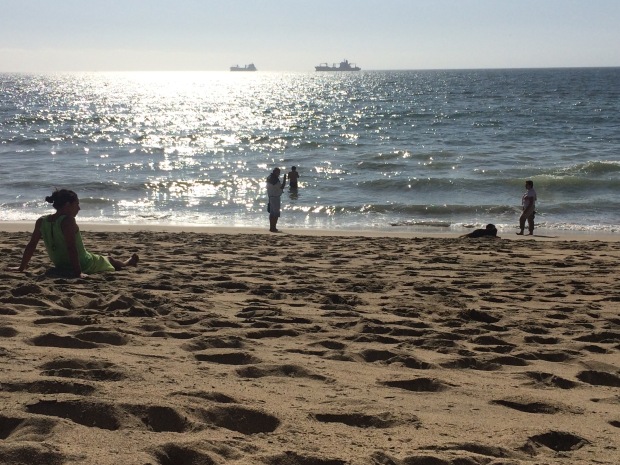 The lifeguard is seated on the left, while the dog is the dark spot by the person on the right

(Top photo: Flowers that line a path at my university)