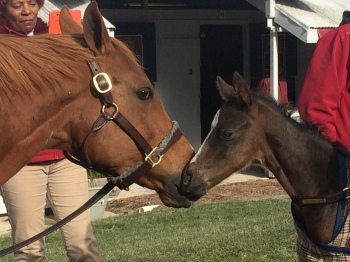 A mare with her foal at the Keeneland January Sale

A year ago around this time, I was attending the Heritage Place Winter Sale in Oklahoma City, which is comparable to Keeneland but for Quarter Horses only.  I worked at the sale as the online communications and publications intern for AQHA, taking photos and networking. However, I was intrigued by the way the sales worked on the equine side with the buyers and sellers. Potential buyers studied the pedigrees of consigned horses from a large book, and came around to their stalls to look them over, watch them walk and analyze their movement.

While working for The Saratoga Special this past summer, I took in the Fasig-Tipton Select Yearling Sale. Although it was the same concept as the Heritage Place sale for Quarter Horses, there was a lot more money involved, it was set up differently and the agencies who consign the horses are different.

After working in the capacity of a journalist and photographer at two different sales, I decided to learn about the sales from a different perspective and actually work with the horses. Because I have a chunk of time off from school before I depart for Chile, I decided to take advantage of that and fly to Kentucky to work a sale for Taylor Made Sales Agency, who handles public and private sales.

In a nutshell, Taylor Made has a farm where they breed their own horses to sell, and they also consign horses for other people. So if a small farm wanted to sell a horse, they could consign it through Taylor Made, who has a very good reputation.

I have plenty of hands-on horse experience from my years of working with my own horses and being at the racetrack. However, except for what my friends with sale experience had told me, I didn’t really know what to expect while working as a sale groom.

Although the Keeneland January Horses of All Ages Sale ran from January 11th through the 15th, I only worked for four days. 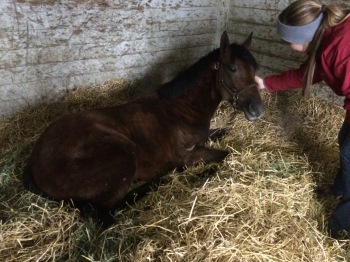 One of the “babies” resting in his stall

Sales are divided into “books,” with the horses who are more likely to bring larger amounts of money selling in the earlier books. Taylor Made had different teams divided up to work with the horses they were selling from each book, and since I was only working with the Book 2 horses, I worked Sunday through Wednesday.

The first day, Sunday, was move-in day for the horses in the barns I would work in. I figured it would be a bit cold in Kentucky, considering its January and all, so I had packed lots of warm clothes. And boy am I glad that I did.

I don’t mean 30 below zero cold the way it gets at home this time of year. But even 12 to 20 degrees when you’re outside for the entire day taking your gloves on and off gets pretty darn cold.

The morning was slow. We shook out straw bales in each stall, hung buckets, distributed hay, and tried to keep warm while broodmares and yearlings trickled into the barn.

The temperature itself wasn’t very cold, but the wind was biting. The two barns in the area I worked were positioned on a slight hill, with one up higher than the other. The wind whipped in and seemed to spin around through the shedrows, cutting right through your scarf and running its cold fingers down your back. 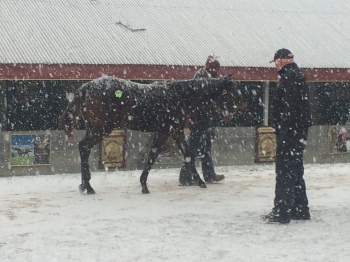 A potential buyer inspects a yearling in the blowing snow

After lunchtime, the action increased. Groups of people were thrown together to begin “topping off,” which is a fancy name for grooming. Each horse’s coat was brushed and wiped off, mane wet down and hooves polished before being led out to have their photo taken, a video filmed or to be appraised by the Taylors, the group of brothers who lead the operations at Taylor Made. The photos and videos allow buyers who are unable to attend the sale to see the conformation of the horses and watch their movement online. Appraisals are performed to determine the value of each horse based on their conformation, the way they move and their pedigrees.

I helped top off and lead horses back and forth to each “station.”

Day two was consistently busy as it was a show day, where potential buyers or their agents come to inspect the horses. The quadrant of the barn that I worked in was responsible for eight yearlings. When a buyer or agent comes to see horses, they fill out a slip in the Taylor Made office with the hip numbers of the horses they want to see. Each horse is given a hip number, which denotes what order they will sell within the sale, and is also useful to keep track of the different horses. This is particularly important with the yearlings, because most have yet to be named.

If someone called out a hip number within my quadrant of the barn, one of the other grooms or I would retrieve the horse they wanted to see. The yearling would then be topped off to assure they looked their best and were led out to a walking area. When it’s your horse’s turn to be viewed, you hand them off to a designated show person, who walks and sets the horse up in a particular way that makes it easier for buyers or agents to see and analyze their action and conformation.  When finished, the show person hands the horse back to the groom, who leads it back to it’s stall or brings it to a different show person to present to another possible buyer.

Day three was nearly the same as day two, and involved showing horses the entire day. One of the highlights for me, aside from working with the yearlings, which I loved, was practicing my Spanish with a group of guys from Guatemala who were also working for Taylor Made. I was thrilled to learn a handful of equine terms in Spanish, and they were happy to teach me. Great practice for Chile! 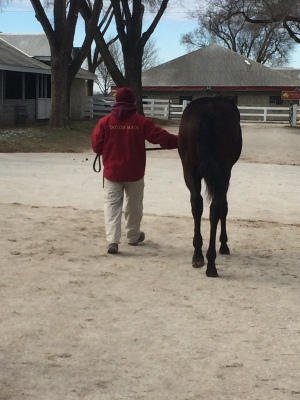 Following hip 882 back from the sale ring

The final day I worked was when the sale of our Book 2 horses took place. Teams were assigned to top off horses before they headed to the sale ring. Official show people led the horses to the ring while a groom followed behind each horse for safety purposes. Potential buyers are allowed to view the horses right up until they enter the sale ring, so I stayed back at the barn for most of the day to help groom and show for people who trickled in for final looks.

I followed two of our yearlings up to the ring with their handlers and grooms to watch the entire process of where they go before they enter the ring, and to see them sell. The first, hip number 856, was a very sweet Graydar filly out of Lorna’s Tapit who sold for $22,000. I expected her to go for a good chunk of change because of her dam being a Tapit mare (Tapit is the nation’s leading sire). She also had a lovely, reaching walk and nice body.

Hip 882 was a spirited Eskendereya colt out of Ms North Carolina. He was also a very nice type with a balanced body, and sold for $10,000.

Two of my other favorites were hips 789 and 1027. Hip 789 was a bay yearling colt by Artie Schiller out of Garden Music. Only a few days earlier I had seen Artie Schiller himself during an open house at WinStar Farm. This particular colt’s walk was my favorite, as his hind legs reached far under his body to give him a long, sauntering walk. His disheveled-looking bay coat and untameable mane wrangled into little braids paired well with his slightly skittish, yet sweet demeanor. He sold for $16,000, and I look forward to seeing where he goes if he gets to the track.

Hip 1027 was a massive yet delicately built dark bay 4-year-old filly named Zooming, selling as a racing or broodmare prospect. Her long, slender dark legs tied gracefully into her longish, powerful body. She had such a feminine appearance, and if a horse could be described as sexy, that was her. Her inquisitive, slightly edgy personality matched her gorgeous body. Her sire is After Market, a black-type winner of $903,685 sired by Storm Cat, and she’s out of a mare named Dance Studio. Zooming sold for $60,000.

The final day of the sale was bittersweet. I was sad to leave the horses and the new friends I made. But I took with me valuable experience and a new perspective on a different aspect of the horse racing industry.

Now on to New York City! 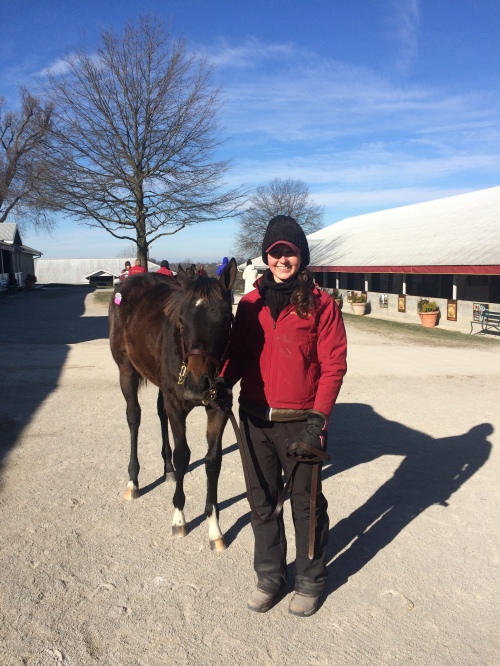