Taking a pic with Big Lex

As soon as I stepped off the plane in Lexington on Friday the 8th, I was welcomed into horse country U.S.A. by a giant mural for Keeneland racetrack and sales. Further down the hall was an enormous photo of “Big Lex,” a horse who symbolizes the fine thoroughbred bloodstock and bluegrass the state is famous for.

I stayed with a friend for the night so we could explore Lexington together and tour a few stud farms before I started working at the Keeneland January Horses of All Ages Sale for Taylor Made Sales Agency.

Some people get excited about going to concerts and seeing famous musicians. On Saturday I got to spend the entire day fan-girling over studs – and I don’t mean hot guys. I’m talking Thoroughbred stallions at WinStar Farm, Spendthrift Farm, and the American division of Coolmore, Ashford Stud.

We started off the day at Ashford. Coolmore can be described on the most basic level as an empire within the horse racing industry, and is active in a number of countries. The conglomerate was founded in Ireland and is owned and run by the Magnier family. In 2014 American Pharoah was sold to them for stud duties, and stands at Ashford for $200,000, the cost people pay to breed their mares to him.

The gates of Ashford Stud

The horse racing industry, which you’ll learn is incredibly historic if you do some research, seems to maintain a level of traditionalism that is often portrayed through architecture. Ashford Stud was founded by Dr. William Lockridge and business partner Robert Hefner in the 1970s, and was sold to Coolmore in 1984. Even the driveway of Ashford radiates regality, and is truly the epitome of traditional, historic beauty.

As we pulled in, wrought iron gates opened to reveal a long, tree-lined drive that rises and falls gently over hills. We parked outside a stone building and checked into the office, which had the appearance of a racing museum dedicated to the accolades of Coolmore horses. Large prints of racehorses decorated the walls of the high-ceilinged room and a toasty fireplace. 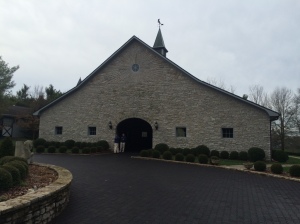 One of the stallion barns

Even though it’s winter and the trees are brown, rolling green hills laced by stone walls sprawl across the land around Ashford. The barns were built mainly of stone with triangular roofs rising into the sky. The insides of the three stallion barns had an open, spacious feeling with light chestnut-colored wood covering the walls.

My friend and I admired the stallions as we walked with our tour guide, a young woman with blond hair whose love of her job was evident as she told us the history of the farm.

The first time we arrived at Ashford that day, we were too late to see American Pharoah outside of his stall. They only bring him out to meet visitors as 11 and 2 – busy stallions have tight schedules. But when we came back at 2 we were allowed to take pictures with him.

In all honesty, I was never a huge American Pharoah fan. I thought he was a fantastic athlete who brought a sort of revival to horse racing, but he wasn’t one of my favorites. However, that didn’t make seeing him in person any less of an experience. As I stood inches away from his powerful and chiseled shoulder muscles for a photo (sorry, not trying to make this sound like I’m at a Chippendales show) I kind of wanted to cry. I have a hard time not getting emotional about horse racing, because it’s a sport I’m so passionate about. To stand next to a newly christened American icon such as American Pharoah was a tremendous experience, and just as exciting as meeting a president or any celebrity.

By the end of the day, I was mentally and physically exhausted. Flying in late and getting to bed at 2 a.m. takes its toll on a person, as does running around the countryside to three different stud farms and standing next to a horse that will go down as a legend in the horse racing industry.

I have a bit of advice if you ever travel to Kentucky and would like to experience the Thoroughbred culture:

First off, I would recommend looking up scenic byways around Lexington. It feels as though you’re driving through a picture with the rolling hills, black fences, horses and elegant barns. Even in January you really can’t beat the scenery. 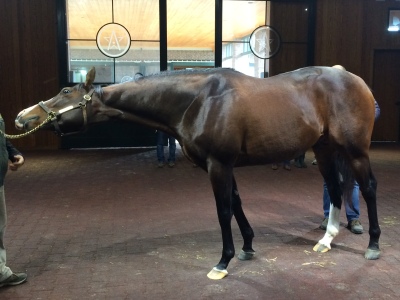 Second, tour stallion farms. Even if you don’t know much about them, a quick google search will provide recommendations of popular ones to see. On this trip I visited WinStar, Spendthrift and Ashford, and in the past I’ve been to Three Chimneys and Claiborne. All were awesome and I don’t think I could pick a favorite. If you follow these places on social media, keep tabs on them to see if they post info about open houses. The open houses I’ve been to were very interactive, as the staff was on hand to answer questions and take you around. They often bring out the stallions to show them off, and they sometimes even provide food or snacks. If you miss out on open houses, you can always call farms directly to schedule tours or book them through a tour company. 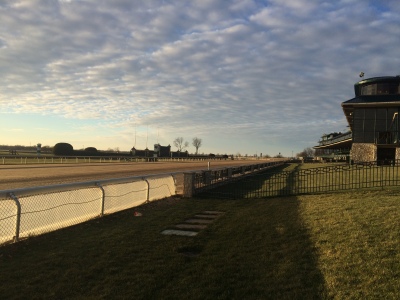 A view of Keeneland racetrack

Visit Keeneland. Even if you don’t go for the races, just stop in and take a peek at this historic race place. If you’re interested in horses or thoroughbred pedigrees or even just people watching, try to make it for a sale. Being at the sales pavilion and watching money fly over blue-blooded Thoroughbreds is exciting.

Although I didn’t make it there during this trip, the Kentucky Horse Park is pretty much Disney World for horse lovers. Horse museum, horse statues, horse demonstrations, different horse breeds and even horse shows. It’s all horse and it’s all there.

The next installment of my adventure will be about what it’s like to work at a Thoroughbred sale!

Read the first installment of my trip to Lexington and New York City!