The first time I watched live horse racing, it wasn’t at a pristine track like Keeneland, or the timeless staple, Saratoga. There’s no sweeping grandstand or meticulously manicured infield. Instead, a set of shiny metal bleachers covered by a white awning overlook the stretch. A blanket of prairie grass dotted with cross-country jumps spreads across the infield. 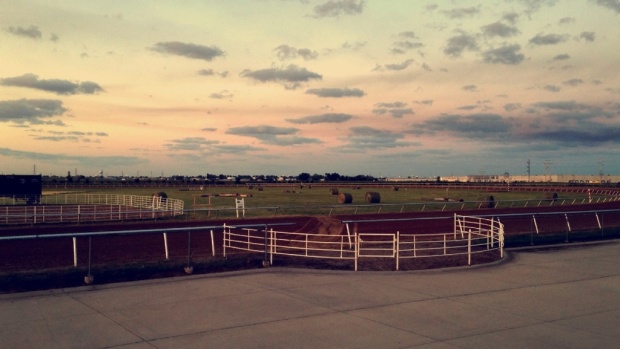 Unless you’re from Fargo, North Dakota, you’ve probably never even heard of this track, and maybe never will again after you finish reading my story.

My mom brought me to the opening weekend of the Fargo track back in 2003. My 8-year-old self knew nothing about horse racing. But I peered over the chain link fence lining the rail, studying the horses as they left the paddock and paraded to the starting gates.

Visiting the starting gates during my 13th birthday party

Fast-forward 5 years down the road. I have memories of my 13th birthday party at the North Dakota Horse Park. The sunny day flipped a switch and the skies opened up before the final race. The crowd shuffled hurriedly towards their cars to escape the dreary weather. But my three horse-loving friends and I held our ground – we couldn’t give up our prized spot along the finish line, regardless of the weather. We didn’t care that it was raining and no one else wanted our spot. Or even that it was a $2,800 claiming race.

I remember the feeling of chills and excitement as Dr Ty and Fargo Time trudged down the stretch. The two thoroughbred geldings, both seasoned track veterans, duked it out down to the wire and were separated by a nose. But to me it didn’t matter who had won or how cheap the horses were. Because what mattered most was the experience.

In 2009 I was hired for my first “job,” working as a volunteer racetrack ambassador at the NDHP. I was the official spokeswoman for the horse park’s mascot, an ex-racehorse named Barracuda Boy. The Adena Springs-bred gelding by Unbridled’s Song out of Bucquestor, was a graded stakes winner who earned $229,377 throughout his career. My mom used to drive me to the track during the week to watch morning workouts, and again on weekends to stand with Barracuda Boy during the races to educate fans about his racing career.

But financial difficulties caught up and the track closed down – not an uncommon story for many tracks. For 2 whole years there was no horse racing in Fargo. During those 2 years, my passion for racing never waned, but I had nothing to keep me involved in the sport. Gone were the early mornings of sitting on cold metal bleachers as horses galloped past. No more Sundays pouring over racing programs and telling my mom which horses to bet on so we could win our burrito money for the day. There was no quick drive down the interstate to the track, because the next closest racetracks were more than 3 hours away. 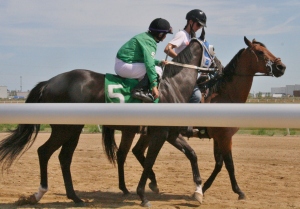 But the resilient little North Dakota Horse Park made a comeback in 2012. And you can bet your britches I was there, this time working as a pony rider.

The following summer I tried my hand at journalism for the first time, interning for the Director of Media Relations. I conducted my first interviews with owners, trainers and jockeys at the horse park, and wrote my first racing articles for the track website. In 2014 I was promoted to Director of Communications.

Me and Cyclone Larry back in 2009. Larry eventually became my horse. Photo by Heather Benson

Small racetracks like the North Dakota Horse Park offer unlimited opportunities, or at least that’s what it offered me. It was a place to learn and make mistakes and ask questions and start from the bottom.

It was a place of firsts. First horse race, first volunteer job, first internship and first “big girl” job. The first time I galloped a racehorse was over that track, and it was there where I met the first thoroughbred I would come to own.

In 2015 financial troubles caught up once again and the horse park remained dark for yet another season. But at that point, I was embarking on a new adventure. I left a small hometown track equipped with the skills to work at one of the greatest racetracks in America. I spent the summer reporting on racing at Saratoga for The Saratoga Special. 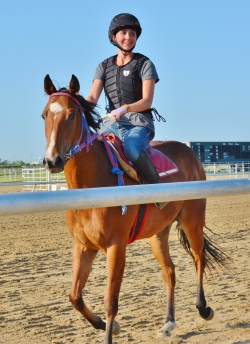 A far cry from Fargo, for sure.

But even tiny tracks like the North Dakota Horse Park play an important role in the horse racing industry. Because the cream of the crop sometimes starts at the bread-and-butter level.

Take Hall of Fame trainer Bill Mott, for example, who started training at dot-on-the-map tracks in South Dakota. Or up and coming trainer Joe Sharp, who actually rode winners at the North Dakota Horse Park during his jockey days.

I have several friends who grew up attending the races at Belmont on weekends, or summering in Saratoga with their families. These locations are the picturesque faces of horse racing, the hubs of the industry – the places where champions are crowned champions.

As I grew up going to the North Dakota Horse Park, I had nothing to compare it to. But in the long run, nothing really compares. The track will never see a Triple Crown winner, but it will produce success stories in a roundabout way.

The North Dakota Horse Park will make another comeback in 2016, hosting races over the final three weekends in July.

A new opportunity for other horse crazy kids to become aspiring industry leaders.

Interviewing a racehorse owner at the horse park in 2014

3 thoughts on “Tribute to a Tiny Racetrack”