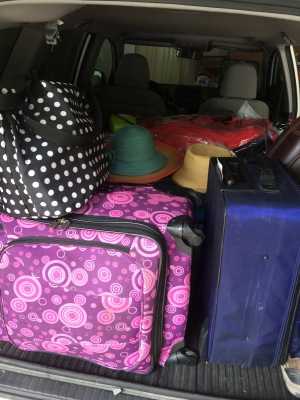 I promise I left the kitchen sink at home…

The journey has commenced, and I am currently en route to Saratoga! My mom and I pulled out of the driveway around 10 a.m. this morning, thus embarking on our journey east. The original plan was to head out around 8 a.m. But considering my keen ability to procrastinate when it comes to packing, we had to deviate from the plan.

In preparation for working at The Saratoga Special, I was assigned a bit of prep work a few weeks back that involved interviewing two trainers. Of course my number popped up on their phones as Fargo, N.D., and they both probably wondered why in Heaven’s name is there someone calling them from Fargo. One of them actually asked me, ‘Are you really from Fargo? I’ve seen the movie, it’s a classic.’

The movie Fargo is basically a legend where I’m from, although very little of the movie was actually filmed or took place in the city of Fargo. But up until last night, I had never watched it, and to be completely honest that’s probably not a bad thing. I thought it was a terrible film, although Marge, the main character was a fantastic female protagonist.

But anyways, to all of my Saratoga co-workers and friends to-be, I’ll have you know that I’m leaving my wood chipper and parka at home. However I cannot guarantee that you won’t catch me saying ‘Ya’.

Looking out onto Lake Superior

Now back to the trip. With our trusty atlas and iphone in hand (we never travel without our Rand McNally atlas from 1997) we headed east to Duluth, M.N. where we explored for a few hours. When I travel, I find that there are never enough descriptive words for me to write about my impression of the cool places we visit. But if I could describe the downtown area of Duluth in one word, it would be whimsical. When we entered the city on interstate 35, the scene was a mess of random roads and industrial mumbo jumbo.

When we found our way to the shores of Lake Superior near Canal Park, the scene transformed. A fresh, crisp air blew off the lake to balance the temperature of a brilliantly sunny day. A slight haze caused by the wildfires in Saskatchewan could be faintly detected, but did not detract from the beauty.

Draft horses pulling carriages with tourists clopped down the street along the boardwalk. Families strolled and biked by, enjoying the beautiful day. Small boats and big ships crossed under an aerial lift bridge as they left the Duluth Ship Canal and entered the vastness of Superior. Seagulls squawked as they sailed overhead.

A ship crosses under the aerial lift bridge.

My mother and I walked down the boardwalk and across the aerial lift bridge to a pier on the other side of the canal. We took in the sights on the Superior side and the harbor side of the canal before walking down a street to view a beautiful flower bed we saw from a distance.

While admiring the flowers we struck up a conversation with two delightful women who recommended that we dine at the Duluth Grill on our way out of town. The restaurant serves organic food, and they grow much of it themselves. It was delicious and I would highly recommend it, but splitting a meal would have been more than enough because the portion sizes are enormous. 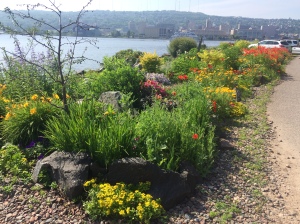 We left Duluth and crossed into Wisconsin on the 535 bridge, which gave us a tremendous view of the harbor.

On our trip across Wisconsin, I read through 2014 issues of The Saratoga Special, sharing many of Sean Clancy’s “Cup of Coffee” articles with my mom.

Our final destination for the night was Ironwood, M.I. where we found the perfect little motel with a sign in front that reads “In God we trust.”

Tomorrow we journey across Michigan, so be sure to check back to read about day 2 of #FargotoSaratoga!