As American Pharoah swept the Triple Crown, a sigh of relief and a breath of fresh air swept through the horse racing industry. 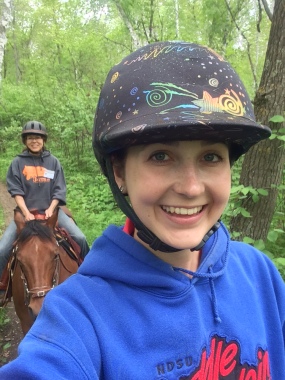 My mom and I enjoyed the trails at 4-H horse camp.

It’s taken me a while to gather my reeling thoughts after American Pharoah’s breathtaking sweep of the Triple Crown. This Triple Crown season was fulfilling in a way that I’ve never felt before, and I think others felt that way as well.

Leading up to the Kentucky Derby, I was skeptical about the hype surrounding American Pharoah. For the past few years I’ve sensed that the racing industry is looking for a hero. We hold our breath each year as we wait on his or her arrival, but end up with a feeling of emptiness and longing.

The first year I really began following the Triple Crown was in 2008 when Big Brown swept me and countless others off our feet in the Kentucky Derby and Preakness. I was attending 4-H horse camp at the time of the Belmont, which inconveniently lacked a television for me to watch the race. I called one of my friends and she held the phone up to her TV so I could listen to the call. I remember standing outside of the camp dining center with tears running down my face when I realized Big Brown had not only missed out on the Triple Crown, but had ended the race without a fighting chance.

After this year’s Kentucky Derby, something changed. I felt a spark of hope which turned into a small flame as American Pharoah seemingly floated through the slop at Pimlico to take the Preakness. I screamed so loud as he turned down the stretch that the animals who inhabited the house I lived in at the time seemed to run in place as they attempted to escape this human who had clearly gone insane.

Three weeks after the 2015 Preakness and seven years after Big Brown’s bid for Triple Crown glory in the Belmont, I found myself back at 4-H horse camp, this time as an instructor rather than a participant. I called the local Dairy Queen to see if they had a TV, and thankfully they were kind enough to let my mom (who was assisting my class at camp) and I occupy one of their tables for the duration of the race. Two women at a nearby table asked us about the race, and one of them told the other she couldn’t leave until they witnessed the outcome. Not long before post time, a busload of track students pulled up to DQ, and before we knew it there was a gathering of people around the TV.

The gates flew open to release eight finely-tuned, beautifully built Thoroughbreds. But one stood out above the rest. American Pharoah flew to the front of the pack and held his lead throughout the race. The only moment I began to sweat was when they rounded the far turn. If he was going to fade, it would be soon. But my doubts needn’t have arisen. As American Pharoah bounded ahead and it became clear he would win, I simply broke down. The people around me were screaming. My mom, also teary-eyed, cheered joyfully. I was crying so hard my entire body shook. As he traversed across the finish line, my mom and I hugged our new friends whose names we didn’t know. But that didn’t matter, because we had shared one of those unforgettable moments where everything but sheer emotion and joy flies out the window. I was so happy.

That night when I perused Facebook, I couldn’t help but notice the joyous posts from hard-core racing fans and casual onlookers alike who had witnessed the triumphant run by American Pharoah. Many of these posts made mention of how they – both men and women – were brought to tears.

I’m not an avid fan of many sports besides those horse-related. But I’ve never gone on Facebook after a Superbowl or World Series game and read reflections filled with pure and raw emotion like that.

I don’t believe horse racing ever needed a hero. What it needed was rejuvenation – a reminder of why we love the sport – and that’s exactly what we saw this Triple Crown season.