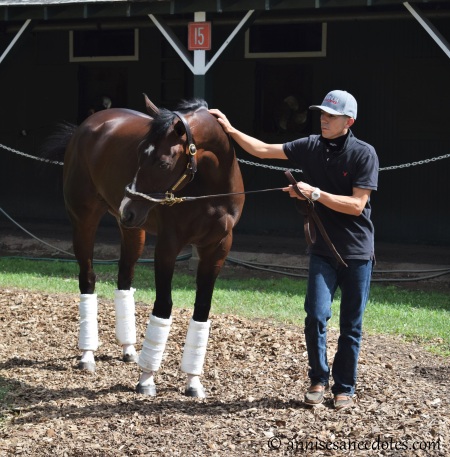 Edgar Rodriguez, a 29-year-old native of Mexico, began working for Hall of Fame trainer Jerry Hollendorfer in southern California six years ago. Now he works as a rider and groom to the amazing Songbird, champion 2-year-old filly of 2015 and winner of the July 24 Coaching Club American Oaks at Saratoga Race Course. Today she goes to post for the Grade 1 Alabama Stakes.

I caught up with Edgar on the Wednesday afternoon before the Alabama while Songbird grazed outside her barn on the backside of Saratoga. A quiet man who doesn’t waste words, Edgar did not have much to say, but his facial expressions as he spoke and the way he interacts with Songbird speaks volumes that I can’t possibly describe through a Q & A. In a nutshell, it’s pretty clear that he adores her. END_OF_DOCUMENT_TOKEN_TO_BE_REPLACED