The Breeders’ Cup is doing its part to encourage Latin American involvement in the U.S. 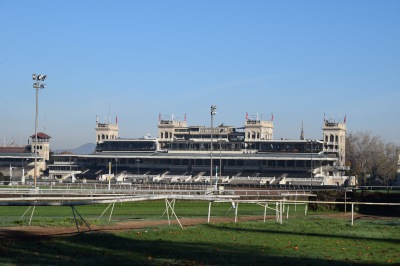 On May 22, 2016, I walked through the stone arch and wrought iron entrance gates of Club Hípico de Santiago racecourse (CHS) to claim my press and photography passes for a race called the Clásico Club Hípico de Santiago-Falabella. The 147-year-old grandstands of Club Hípico looked like a castle, crowned by swaying flags of Chile and the CHS logo. Run for the first time in 1903, the race’s history and prestige stands for itself. However, the 2016 edition would have added incentive, as it had been designated the Breeders’ Cup Challenge Race of Chile – a “Win and You’re In” for the 2016 Breeders’ Cup World Championships at Santa Anita Park in California.

The Breeder’s Cup, founded in 1984 and operated by Breeders’ Cup Limited, is a two-day horse racing championship held in the United States each year. The event offers $28 million in purse money and attracts horses from around the world. The Breeders’ Cup includes a lucrative nomination program and the Challenge Series, also referred to as “Win and You’re In” races. These races, held across the globe, allow the winning horse and their connections to travel to the Breeders’ Cup by paying their expenses and offering a berth into the race. The Breeders’ Cup website states “And while these two days have seen legends born, history made, and fortunes won, the greatest part is that the best is still yet to come” (“About”). END_OF_DOCUMENT_TOKEN_TO_BE_REPLACED