Ever since arriving in Viña (as the city is fondly called) I’ve been dying to check out the racetrack. My bus drives past the Valparaiso Sporting Club on its way to deliver me to classes, and my university, situated on a hill overlooking the city, provides a convenient view of the track. My breaks between classes are generally spent sitting in the lush, vibrantly green grass and watching the morning workouts. Yes, I do believe I picked the right place to study, and I swear I didn’t even plan that!

My curiosity got the best of me last Thursday, and I walked to the track for morning workouts, which are apparently not as common for people to watch as they are in the states. I bypassed the open door where maintenance staff was entering the grandstands, not wanting to tempt fate and have a run-in with security guards. Instead I played it safe and stood next to a low gate along the outside rail of the turf course. It wasn’t an up close and personal view, but I wasn’t complaining. I attached the zoom lens to my camera and started snapping away.

Aside from two or three who I saw putting in timed workouts, the majority of the Thoroughbreds here gallop without saddles, just a pad and a girth. The atmosphere was quiet and relaxed, nothing like the bustling morning traffic at Saratoga.

Most of the horses cantered along lazily, ignoring the maintenance crew who was running weed-wackers and lawnmowers around the track. One or two threw their heads and thought they wanted to take off with their riders, who leaned back at a precarious angle in an effort to control their mounts.

Despite my precautions to avoid security guards, they found me anyways. I was so busy snapping photos and analyzing the horses that I hadn’t even noticed the guard who had appeared next to me. He stared at me with a confused expression, so I smiled. He smiled back and still didn’t say anything, but the look on his face said “What are you doing here and do you speak Spanish?” I jumped right in and started jabbering (in Spanish) about how I was a student and I had come to watch the horses workout.

When I finished my explanation, he started talking back to me in Spanish, which I can generally understand quite well. But in this instance I only caught about 20% of what he was saying because of the weed-wackers blaring close by. So I did what any “Gringo” would do – smiled and nodded, said ‘Sí’ a lot and stayed where I was. He seemed nice enough and didn’t seem angry, so why not? 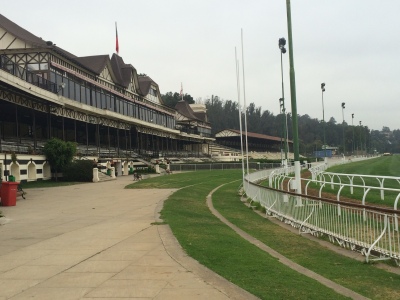 The story gets even better. I’ve had a lot of small-world encounters during my years at the track, but none quite as crazy as the one I had on Wednesday, my first night at the races here.

The Valparaiso Sporting Club is a picture of classic grandeur in a petite package, with a large, sprawling turf course (called ‘pista’ in Spanish) and inner dirt track (called ‘arena’). The grandstands have a slightly German flair in the style of the architecture, and admission to the races is free.

Although it was a Wednesday evening, I was surprise that racegoers were so few and far between. However I enjoyed the a laid-back atmosphere, and it made it easy to walk back and forth from the track to the paddock. A few families were gathered on the lawn in front of the stands, and vendors carried boxes of empanadas and tortillas around the paddock area. 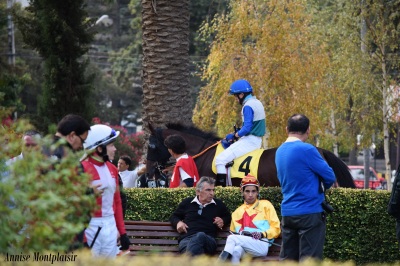 Even the horses were laid back. One of the grooms led his racehorse right up to the rail along the saddling area and asked if I wanted a photo. One of the pony riders jumped off between races and allowed his horse to wander the paddock as it pleased.

Sometimes, the greatest decision you make in a day is to wear a particular baseball hat. On Wednesday, I made the wise choice to slap on my “Embrace the Race” hat, given to me by Tom Law from The Saratoga Special last summer.

As my friend tried to decipher the racing program and I clicked away on my camera, a guy came up to us and pointed to my hat.

He introduced himself as Ivan, and as it turns out, he worked at Saratoga for many years in the Morning Line Kitchen, which is where I converged with The Saratoga Special team every morning before rounding up interviews. Giddy with excitement over this new realization, I explained that I had worked at Saratoga last summer writing for The Saratoga Special. His face also lit up. He was well aware of the paper and knows the owners and publishers, Sean and Joe Clancy.

Ivan brought us over and introduced us to his father, who goes by the nickname Cuco. Not only did Cuco know the Clancy guys and The Saratoga Special – he actually worked for Hall of Fame trainer P.G. Johnson with Sean Clancy! 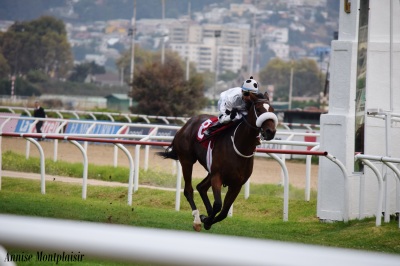 Cuco took my friend and I up to the top of the grandstands where the owners watch the races, and then down to the paddock. He introduced me to one of the announcers and the owner of a racing publication, called La Hípica, and offered that if I ever want to come in the mornings he’d give me a tour of the backside. Looks like I’ll be spared another run-in with the security guard!

The icing on the cake was watching Sigue Regaloncita win the Grupo III Clásico Municipal de Viña del Mar under jockey Manuel Martinez. The purse to the first place horse was $8,000,000 Chilean Pesos, which is approximately $11,914 US dollars.

Sigue Regaloncita in the winners circle

The sun sunk slowly as nighttime crept in, dimming the natural light over the racetrack. The lights around the track lit up, and hundreds of sparkling house lights flickered on, illuminating the hills around Viña.

We couldn’t stay for the entire 18-race card, as dinner with my host family was awaiting me at home. But I left the track with the same feeling you get after eating a piece of chocolate – rich and satisfying yet still wanting more. There’s no doubt I’ll be attending the races many times during my four months in Chile.

When I emailed Sean to tell him about the experience, this was his response:

That’s brilliant. Cuco is a legend, we worked for Hall of Famer P.G. Johnson together, he’s one of the all time greats.

It sure is a small world. And sometimes, you just happen to be wearing the right hat.

be sure to check back for future racing blogs and an upcoming photo blog!